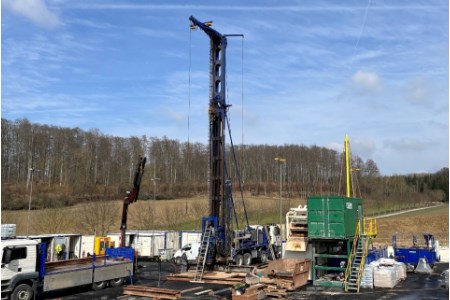 The hole is scheduled to be completed in early May and will be assayed for chemical composition immediately once core is withdrawn.

The first of the two planned confirmatory drillholes was completed earlier this month to a final depth of 721 m. The core from the identifiable salt horizon was prepared and 61 samples were issued to the laboratories of K-Utec Salt Technologies GmbH (“K-Utec”) from which the results are expected in approximately 2 weeks’ time. Approximately 10 further samples will be sent to a different laboratory for confirmatory analyses as required by JORC 2012 regulations.

Drillhole OHM-01 is planned to a depth of 813 m, targeted to fully penetrate the known potash horizon in the area. The drillhole is designed to twin the historical drillhole, Kal Ktf 5/83, which recorded a potash intercept from 785.2 m to 788.2 m (3 m thick) with an historic reported grade of 12.4% K2O.

Drilling and assay of these two confirmatory drillholes is targeted to allow South Harz to upgrade a substantial proportion of the current Ohmgebirge JORC (2012) Inferred Mineral Resource estimate to the Indicated category. Subject to concurrent and satisfactory advancement of all modifying factors, this is expected to allow the release of a comprehensive Scoping Study (a preliminary technical and economic assessment) for Ohmgebirge, which is scheduled for completion in the coming months.

South Harz Managing Director, Dr Chris Gilchrist, commented: “This is yet another momentous milestone for the company. After months of planning and preparation, drilling has advanced according to our overall objectives which also includes zero safety or environmental incidents and with the full support of the local communities. We are on target now to complete the second drillhole by early May and to release the Mineral Resource Upgrade and Scoping Study thereafter.”

Read the article online at: https://www.worldfertilizer.com/project-news/17032022/second-hole-drilling-begins-at-ohmgebirge/