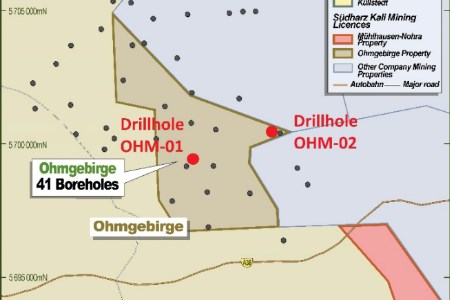 The first confirmatory drillhole at Ohmgebirge, OHM-02, was designed to twin and confirm the results of the historic drillhole, Kal Wr 6 Liese, which was drilled in 1906. This historic drillhole recorded potash within the Staßfurt Potash Horizon from a depth of 651.7 m to 657.20 m (5.5 m thickness) with an historic reported grade of 14.4% K2O.

Drilling of OHM-02, located 115 m west of the historic drillhole, has been safely completed to a final depth of 718 m, in order to fully penetrate the known Staßfurt Potash Horizon. Critically, OHM-02 intercepted the top of the Staßfurt Potash Horizon at 651.3 m, which is effectively the same depth as recorded in the historic drillhole. It also showed excellent stratigraphic correlation with the historic hole. The intercept returned in OHM-02 extended to a depth of 666.54 m.

The core from OHM-02 is being prepared ahead of despatch for assay with results expected to be received in approximately 4 weeks. Downhole geophysics are also set to be conducted on OHM-02 prior to the final grouting of the drillhole.

Harsh weather conditions in Thüringa have hampered construction of the drill pad for the second Ohmgebirge confirmatory drillhole, OHM-01. However, the pad is now nearing completion with a final asphalt layer expected to be laid in coming days, after which the drilling equipment will be mobilised to site. Drilling of OHM-01 is now scheduled to be completed by late April, with assays likely to be received by mid/late May.

Drilling and assay of core from these two confirmatory drillholes is intended to allow South Harz to upgrade a substantial proportion of the current Ohmgebirge JORC (2012) Inferred Mineral Resource estimate to the Indicated category. Subject to concurrent and satisfactory advancement of all modifying factors, this is expected to allow the release of a comprehensive Scoping Study (a preliminary technical and economic assessment) for Ohmgebirge.

Due to the weather-induced delays in drill pad construction for OHM-01, the Ohmgebirge Scoping Study is now expected to be completed during June 2022 (previously May 2022), provided there are no further unforeseen technical delays.

Read the article online at: https://www.worldfertilizer.com/project-news/03032022/first-drillhole-completed-at-south-harz-potashs-ohmgebirge-licence/