The liquid nitrogen fertilizer manufacturer Brineflow LTD has started construction on a new purpose-built terminal at the port of Sunderland, UK. 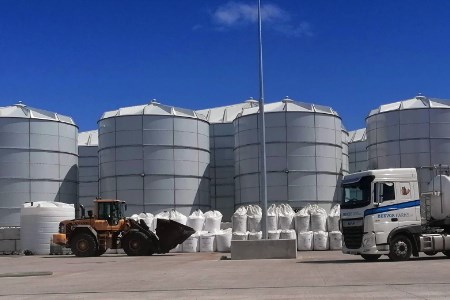 Civil engineering and construction specialist G&B has been appointed to lead the project and is working with the firm to ensure that as many local contractors are involved in the development as possible, including DTA Consulting Engineers, based at the North East Business & Innovation Centre (BIC).

The terminal will see Brineflow import and store liquid fertilizer for the agricultural industry in the North East of England and borders, breathing new commercial life into disused land at Young’s Quay on the port’s Hudson Dock.

Brineflow is aiming to have the hub fully operational by July 2021 and expects it to play a key role in helping the company continue expanding its market share of the UK fertilizer industry.

John Fuller OBE, Chairman of Brineflow, said: “The market for liquid fertilizers is growing rapidly as it allows farmers to control applications more precisely and with less equipment. This new terminal will help farmers from the Humber to the borders be more productive as well as more environmentally friendly and we are looking forward to working with the team at port of Sunderland as we look to the future.”

The Great Yarmouth-headquartered company identified the port of Sunderland as a potential site due to its strategic location on the east coast with proximity to suppliers in the Baltic States and for larger cargoes trans-shipped in Rotterdam and other European ports.

Another key influencer in Brineflow’s decision to invest in port of Sunderland was the ongoing expansion of the port. Since being awarded Enterprise Zone (EZ) status in 2017, the port has invested millions in critical infrastructure works, road improvements and ensuring the site is investor-ready.

Fuller added: “The port of Sunderland is in a great location on the north-east coast with easy access to most of our key destinations, from East Anglia up to Scotland. The proximity of the port to the main road network and the completion of the Northern Spire bridge also played a key role in our decision to move to the city.

“The teams at both the port and Sunderland City Council have also been very easy to work with ever since we first opened dialogue with the two organisations and have worked tirelessly to make the entire process as seamless as possible.”

James Riley, managing director of G&B Civil Engineering, said: “As a project team, we’ve worked on a number of projects of significant importance across the North of England over recent years and are delighted to add the development of Brineflow’s terminal at port of Sunderland to our portfolio.

“At a time of such economic uncertainty, it’s not only refreshing to see companies such as Brineflow continuing to invest in the UK but also in local supply chains, creating opportunities for local businesses and safeguarding jobs in the process. We can’t wait to get started and are looking forward to building on our relationship with Brineflow and the port as we look to the future.”

Port of Sunderland Director, Matthew Hunt, added: “We are delighted to see Brineflow finally break ground on the Young’s Quay site and it’s great that they’re so committed to boosting the local economy by not only creating jobs at the terminal, but working with local companies throughout its supply chain on the development of the hub.

“Since securing EZ status in 2017, we’ve invested millions into making the port investor-ready and this news, coupled with the recent announcements of Osprey and Wastefront investing in facilities at the port, shows just how much we’ve grown over the past three years and we’re looking forward to seeing what the future holds for the port.”

Read the article online at: https://www.worldfertilizer.com/nitrogen/08122020/brineflow-breaks-ground-on-new-port-terminal/

The company has announced the appointment of Zain Ajlouni as a Regional Director of Sales, Marketing and Customer Services for the Middle East and Northern Africa (MENA).