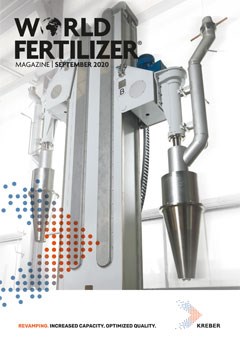 If 2020 were a novel, critics would be swift to deem the plot convoluted and unrealistic. The tragic series of events which have unfolded over the past 8 months seem beyond the reach of even the wildest of imaginations.

And yet, as the year progresses, new dramas continue to unfold, each impacting communities, countries, and industries particularly harshly when combined with the global coronavirus pandemic. In August, it appears that it was both the fertilizer industry and Lebanon’s turn to fall victim to the curse of 2020.

On the evening of 4 August, social media videos recorded a large fire at the Port of Beirut for the world to witness. Shortly after, at 18.00, the roof of one of the warehouses in the port caught alight, leading to an initial large explosion, followed by a series of smaller blasts. Approximately 30 seconds after the initial blast, a mushroom cloud was sent into the air as a colossal explosion propelled a supersonic blast wave radiating throughout the city. The buildings surrounding the port were levelled as a result of the blast, and extensive damage was sustained over the city.

Overall, the event killed at least 200 people, injured over 5000 more, and an estimated 300 000 people have temporarily been made homeless.

The cause: 2750 t of ammonium nitrate which had been stored unsafely at a warehouse in the port. Because of this, the fire that had broken out in the port – as a result of welding work being carried out on a hole in Warehouse 12 – had unfortunately come into contact with the poorly stored substance, with disastrous consequences.

However, it is important to note that (as we already know within the fertilizer industry) ammonium nitrate is very safe when stored correctly. If you are interested in reading more about the thermal stability of ammonium nitrate, you can turn to pg. 61 to read an in-depth analysis on the topic written by Peddie Engineering. In the Beirut explosion, it was the improper storage of the product which greatly contributed to the magnitude of the explosion.

The event in Beirut has had global ramifications, especially as the leading use of ammonium nitrate is in fertilizers. And the heaviest user of ammonium and ammonium nitrate-based fertilizers is also the home of World Fertilizer magazine: the UK. As a result, following the news of the explosion, the British Ports Authority were quick to release a statement on the safe handling and storage practices of ammonium nitrate in the UK, detailing the legislation already in force within the country.

Safety is a key concern of any industry, particularly in the fertilizer manufacturing industry where the margin for error is small and the consequences can be disastrous. In our September issue, we have a wide array of articles focused on improving plant safety, ranging from the mitigation of explosion risks in high-pressure scrubber replacements on pg. 27, to integrated de-dusting solutions designed for cooling processes on pg. 36.