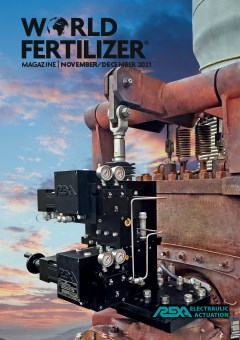 Welcome to this year’s final issue of World Fertilizer. Writing last month, I alluded to Australia’s fledgling sulfate of potash (SOP) mining industry and the number of companies seeking to be the first to commercially produce SOP.

Since then the field has narrowed, at least for now – Salt Lake Potash, which held the Lake Way asset in Western Australia and was aiming for 245 000 tpy of production – has gone into receivership with millions of dollars owed to creditors, including government agencies. A buyer for the project is now being sought. Despite this blow to Australia’s aim of transitioning from an importer to a leading exporter of the fertilizer, confidence amongst other Australian SOP players about the sector’s prospects remains strong.

The regional report for this issue, ‘On The Rebound’, captures the sense of flux within the wider fertilizer industry: on the one hand, high energy prices, production cuts, plant closures and the CEO of Yara International speculating at COP26 on a possible food crisis next year; on the other hand, strong food commodity prices and yet more green ammonia projects being announced. Turn to p. 10 to read Gord Cope’s review of 2021 and his take on what 2022 will bring.

Ever since our first issue was published just over 5 years ago, World Fertilizer has always held a global outlook, and this issue is no exception.

On p. 41, Glatt Ingenieurtechnik GmbH report on a circular economy project in Germany that entails recycling phosphorus from sewage sludge ash. On p. 45, Compressor Controls Corp. (CCC) explain how an “outdated, unsafe, unreliable and energy-inefficient” process air compressor in a fertilizer plant in Asia was transformed into a safe, productive asset.

Returning to another comment piece from earlier this year, in March I highlighted Uralkali’s foray into Formula 1 (F1) racing through its sponsorship of the Haas F1 Team. A key aim of sponsorship, according to Uralkali, was to boost sales in key export markets. With only three races left to go in this year’s season, on the track things haven’t gone well for the team’s drivers Mick Schumacher and Nikita Mazepin: Haas is currently bottom of the 10-team Constructors’ Championship with zero points. Uralkali’s most recent financial results (for 1H21) are more promising. How much of the US$535 million profit achieved can be attributed to Uralkali’s branding across the globe-trotting F1 circuit is something for the company’s marketing department to decide…

Last year’s Christmas and New Year celebrations were markedly different for many people around the world. Hopefully the upcoming festive season will be closer in form and spirit to those of pre-COVID times. Everyone on the World Fertilizer team would like to take this opportunity to wish all of our readers, editorial contributors and advertisers well, and thank you for your continued support.