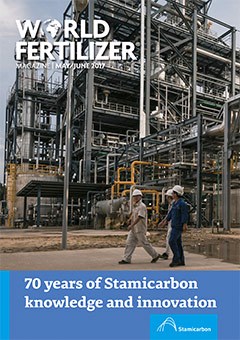 With a current population of 1.242 billion, Africa is the second most populated continent after Asia (4.473 billion). However, whilst Asia has benefitted from a so called ‘Green Revolution’ that by systematically improving harvest yields has led directly to reduced poverty, Africa in contrast, lags somewhat behind from an agricultural perspective, in many instances utilising techniques and practices that have not changed for centuries.

This is a continent that therefore represents an untapped market and a tremendous opportunity for the fertilizer industry. BMI Research notes in its recent ‘Africa Fertiliser Outlook’ that Africa and the Middle East, as a whole, account for just 3.9% of world fertilizer consumption. In Africa, just five countries (Egypt, Kenya, Nigeria, South Africa and Zambia) account for two-thirds of fertilizer consumption. However, recent efforts have shown that improving the lot of African farmers is no easy task.

Although it is urbanising faster than anywhere else on the planet, fundamentally Africa remains a rural continent – 60% of the population live in non-urban environments. Compare that to Europe where the population is 74.5% urban or North America where the figure rises to 82.8%. As a result, vast tracts of Africa are engaged in agricultural cultivation but by and large this is small-scale subsistence farming. Yields are low because soils have become severely nutrient depleted and are not being adequately replenished. An estimated US$4 billion of soil nutrients are lost across the continent each year. Where fertilizers are available, poor infrastructure (roads, ports and storage), weak currency (most fertilizer is imported to African nations) and politics (and in some instances corruption) make it an expensive commodity well beyond the means of most small-scale farmers. As a consequence, Africa is forced to import approximately US$40 billion of food each year. This need not be the case. Certainly Africa is all too often afflicted with headline grabbing humanitarian disasters (droughts, famines, etc.) but on balance and, with the correct investment, incentives and overall political will, it can not only meet its own needs but be a major exporter of food and produce.

In 2006, the African Union of Ministers of Agriculture met in Abuja, Nigeria, to adopt a framework, entitled the Abuja Declaration, aimed at kick starting the ‘Green Revolution’ in Africa. A key tenet of this accord was to increase fertilizer usage across Africa from an average of 8 kg per hectare, a mere 10% of the world’s average, to 50 kg per hectare by 2015. Commitment was made to invest in making fertilizer readily available to farmers as it was recognised that food production rates could not be sufficiently enhanced without increased fertilizer use. Today, over ten years on from this landmark agreement, it is fair to say that no country has yet met their 2015 target. Africa currently averages just 12 kg per hectare whilst conversely Asian countries, such as Malaysia and Hong Kong, average 1570 kg and 1297 kg respectively.

However, there are encouraging signs that steady progress is being made. Nigeria’s Vice President, Yemi Osinbajo, recently reported that better seeds, equipment and huge improvements in fertilizer supply had lead to a tripling of rice production to 5 million tpy. Where the country had imported 580 000 t in 2015, it only imported 58 000 t in 2016. Improvements have also been made to the country’s grain production to the point that Nigeria is today a net exporter of grains. Elsewhere, between 2005 – 2015, Ethiopia recorded an increase of fertilizer usage from 11 kg per hectare to 24 kg per hectare and similarly usage in Ghana and Kenya increased from 20 kg to 35 kg and 33 kg to 44 kg respectively. Each of these countries saw corresponding hikes in agricultural yields.

What is also encouraging are a number of significant ongoing and planned fertilizer projects in locations across Africa. Indeed, World Fertilizer Assistant Editor Harleigh Hobbs discusses just such a project in Eritrea with Punkaj Gupta, Chief Executive of the Essel Group, on p. 24 of this issue.

With fertilizer usage predicted to hit an average of 17 kg per hectare in Africa in 2018, twice the level of 2005, perhaps there are finally signs that the continent is beginning to embrace the ‘Green Revolution’ that has long been recognised as the key to its sustained economic development.