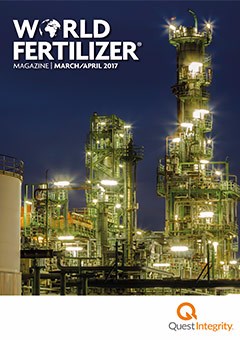 Tackle it with technology

The UN Food and Agriculture Organization (FAO) sees a doubling of yields of wheat, rice, maize, potatoes and other staples as being necessary by 2050 in order to provide adequate amounts of food for mankind in the future.

The sometimes bleak forecasts of global food shortages have so far failed to materialise, mainly due to yield-boosting progress in agriculture and the development of highly-efficient fertilizers. It is no wonder that the industry expects rising demand with the International Fertilizer Association (IFA) forecasting a rise from around 180 million t today to almost 200 million t by 2020. As beneficial as the yield from intensive agriculture and fertilizer production is, the price that the climate has to pay is not to be neglected. The IFA states that around 0.9% of global greenhouse gas (GHG) emissions are attributable to the production of synthetic fertilizers. That means there is a need for action. To set an example, Germany committed itself in 2009 to reduce GHG emissions attributable to agriculture by at least 14% by 2030. Against the background of COP21, this contribution will have to increase worldwide. And the fertilizer industry will also have to make a stronger commitment.

There are essentially two levers if the ecological balance of fertilizers is to be improved. Firstly, the use of fertilizers as a whole could be reduced by improving their efficiency. The energy input during production could also be reduced – a worthwhile field, for the industry’s thirst for energy is large: around 1.2 – 1.4% of the world’s energy is consumed by the fertilizer industry. Here, the onus is primarily on machinery and equipment manufacturers.

Critical voices may protest that the energy consumed in the production of fertilizers is already close to the theoretical minimum. But from the perspective of a manufacturer of the central technology used to produce urea, ammonia or nitric acid, this view underestimates the actual contribution that modern production units could make with more energy-efficient production. This does not just apply to investments in new systems, but also to retrofits and improvements to existing systems.

For example, MAN Diesel & Turbo reduced the energy consumption of a urea plant in Eastern Europe by replacing several CO2 piston compressors with a single gear-type compressor. In the Middle East and Asia, efficiency increases of up to 15% were achieved by using gear-type compressors instead of multi-casing solutions. Potential for optimised efficiency can also be found elsewhere. A compressor in a nitric acid production line can be operated at a higher speed today. The need for a gear box is eliminated, as are the energy losses necessarily associated with it. As a result, the efficiency of the complete production line is substantially boosted.

These examples show better energy efficiency is possible. Modern production technology can make an important contribution to sustainably improving the environmental footprint of the fertilizer industry and ultimately of agriculture in general. Further substantial potential for boosting efficiency, which will be increasingly raised by legislative measures, can be found in upgrades and retrofits for existing systems.

In view of the exponentially growing world population, that is both desirable and essential. Not least against the background of the immense challenges and ambitious goals of global climate protection, any increase or adjustment of production capacities must be realised as sustainably as possible. The use of modern production and systems engineering can ensure this.