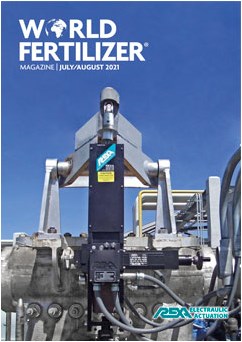 When Belarus’s President Alexander Lukashenko made the decision in May this year to divert a passenger flight carrying regime critic Roman Protasevich to Minsk, it seems unlikely he was considering the effect his act of high-altitude piracy could have on the country’s potash industry. The diversion – on the grounds of a (fabricated) bomb threat – and subsequent arrest of Protasevich caused outrage in Western diplomatic circles. The initial rhetoric coming from EU leaders pointed towards heavy sanctions on Belarus’s potash industry, raising concerns that European customers would soon have to start sourcing supplies from elsewhere.

On 24 June, the EU decided to ban imports of Belarusian potash that have a potassium content of less than 40%, or greater than 62% (keep these figures in mind). Industry analysts have concluded that the sanctions, as they stand, will have little impact. VTB Capital, a Russian investment bank, noted: “The measures do not cover the key Belarusian potash export, potassium chloride, which is 40 – 62% K2O by weight, and accounts for 80% of the country’s supplies to the EU.”1 Humphrey Knight, an analyst at CRU, called the sanctions a “huge reprieve” for Belaruskali, the state-owned producer, and its customers.2 There clearly seems to be some realpolitik at play; tougher measures from the EU could have inflicted punishingly high prices on the bloc’s agricultural industry and driven Belarus ever closer into the orbit of its neighbour Russia. So, for now at least, Lukashenko seems to have got away with it.

Barring this bump in the road, established potash producers and budding market entrants are generally having a good year so far. Prices are recovering from 2020 and appear set fair for several years now – the oil industry and bitcoin investors would crave the predictability potash offers right now. Unlike oil, global demand for potash should grow steadily in step with the increasing need for food worldwide. Canadian giant Nutrien is confident it will set a sales record this year for potash, while at the other end of the scale multiple companies in Western Australia are edging ever closer to first production of sulfate of potash (SOP) fertilizer. In the Middle East and North Africa – as our Contributing Editor Gordon Cope reports from pg. 10 – major new projects are advancing in Morocco and Eritrea. The latter, managed by Danakali, is examining the feasibility of using solar, wind and geothermal energy to become a zero carbon SOP producer; hopefully this will become a feature of other projects.

From potash to trees, and eagle-eyed readers will have noticed a World Land Trust logo adorning the contents page of this issue. World Fertilizer will now be printed on Carbon Balanced Paper, which means that the carbon emissions from the paper in the magazine will be offset through the preservation of ecologically important forests in Vietnam that are threatened with clearing. To find out more about this worthy initiative, please visit www.carbonbalancedpaper.com.