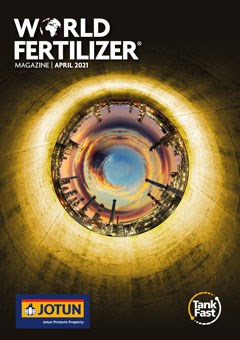 Readers will recall from the previous issue of World Fertilizer that my predecessor, Laura Dean, wrote a comment that noted the importance of fertilizer to the maintenance of sporting facilities, such as football pitches and golf greens: “Thus the fertilizer industry is a major component of the sporting world, even if it isn’t always recognised as such.”

Almost simultaneously to our March issue going to press, Uralkali announced a sponsorship deal that will see the Haas Formula 1 (F1) racing team compete as ‘Uralkali Haas F1 Team’ during the 2021 season and beyond. PhosAgro and EuroChem, fellow Russia-based fertilizer companies, have sponsored chess and ice hockey tournaments respectively in the past, while The Mosaic Company lend their name to a stadium in Regina, Canada. Uralkali’s foray into F1 surely amounts to the highest-profile sports sponsorship deal by a fertilizer company however. The company’s press release noted that it supplies potash to 16 of the 22 countries due to host races this season. The aim of the deal is “to increase its visibility and enhance sales in key export markets…”.1 I cannot say I am a keen F1 fan, but it will nonetheless be interesting to see whether the deal serves Uralkali’s ambitions and gives the industry some broader recognition. The average number of people watching each Grand Prix in 2020 was 87.4 million, so there is certainly potential for ticking the visibility box.

Another recent development that may have captured attention beyond the fertilizer industry was a ruling by the US International Trade Commission on 11 March that the country’s phosphate industry had been “materially damaged” by allegedly anti-competitive subsidising of phosphate fertilizer imports from Russia and Morocco. The ruling was an endorsement of the US Department of Commerce’s imposing of import duties last year, following lobbying from US-based Mosaic. PhosAgro, OCP and EuroChem will therefore have to pay expected duties of 9%, 20% and 47% respectively for at least five years. Neither PhosAgro nor EuroChem have responded publicly, but OCP said that “there is no basis for such duties”; it is still, however, intent on supplying US farmers “and will explore the most appropriate options to do so.”2

The ruling seems certain to have a substantial impact on a market already roiled by fluctuating prices over the past few years. Speaking at CRU’s recent Phosphates 2021 online conference, CRU’s Glen Kurokawa explained that the length of the duties means the “phosphate trade will consequently remain disrupted” as a result of the US importing more from non-traditional markets (such as Saudi Arabia and Australia) and reducing its exports.3 While this story will be more of a slow burner than Uralkali’s F1 adventure, it is certainly worth keeping an eye on.

As always, you can stay up to date with the latest fertilizer industry news by visiting www.worldfertilizer.com – expect to see some exciting new digital content posted there soon as well.