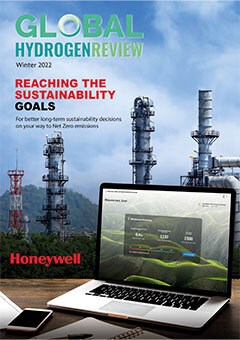 As we all know, momentum in the hydrogen sector is gathering pace, with pilot and demonstration projects taking place the world over. Occasionally, these projects capture the attention of the mainstream media, and shine a bright light on hydrogen’s potential as a game changer for the energy transition. One such project recently took place in the UK, where Rolls-Royce and easyJet conducted the world’s first successful test of a modern aircraft engine powered by hydrogen. The ground tests have been heralded by Rolls-Royce as a “major step towards proving that hydrogen could be a zero-carbon aviation fuel of the future.”

The test took place outdoors at a British military facility in Wiltshire using a Rolls-Royce AE-2100A gas turbine, a design used widely on regional airplanes around the world. Green hydrogen for the test was supplied by the European Marine Energy Centre, and was generated using renewable energy at the centre’s hydrogen production and tidal test facility on Eday, one of the Orkney Islands off the coast of Scotland.
The immediate aim of the project is to demonstrate that it is possible to run and control a jet engine using hydrogen fuel. So far, the tests have shown that the engine can be started up and run at low speed.
Of course, the long-term aim is for hydrogen to play a major role in decarbonising the aviation sector. David Morgan, easyJet’s Chief Operating Officer, believes that hydrogen is a “very exciting proposition” for the sector. He said: “We started a few years ago looking at what might power the aircraft of the future […] We looked at battery technology, and it was quite clear that the battery technology was probably not going to do it for the large commercial aircraft that we fly.”
Rolls-Royce’s customers, Airbus and Boeing, have also started taking initial steps into developing hydrogen technology. Airbus is using an A380 super-jumbo to test its first propulsion system using hydrogen, and hopes that a new passenger aircraft running on hydrogen could take to the skies by 2035. Boeing is testing hydrogen fuel cells on its ScanEagle3 military drone. Meanwhile, NASA recently announced that, with its support, university researchers have made advances towards developing hydrogen fuel cells and electricity-conducting technology to generate power for fully electric aircraft.
Of course, hydrogen aviation remains some way off for now, and will require significant research and investment. There are a number of hurdles to overcome in order to build a new engine that is capable of safely powering a commercial aircraft, and the aircrafts themselves will need to be redesigned to accommodate hydrogen storage. However, the building blocks for this nascent industry are starting to emerge, and there is every hope that the hydrogen aviation sector will now begin to take flight.
On a separate note, I would like to say a big thank you to everyone who recently attended our inaugural Global Hydrogen Conference. The virtual conference was a resounding success, with attendees treated to fascinating presentations from our sponsors: PwC, Honeywell, H2scan, and Evides Industriewater. Everyone at Global Hydrogen Review really appreciates your support, and we look forward to continuing to deliver leading coverage of the hydrogen sector into 2023 and beyond.

Get your free issue of Global Hydrogen Review