The option of recovering ammonia from wastewater has been under review for several years now. This article discusses the possibility of recovering wastewater ammonia, why this is of interest and the potential impact that may be achieved in terms of greenhouse gas reduction. 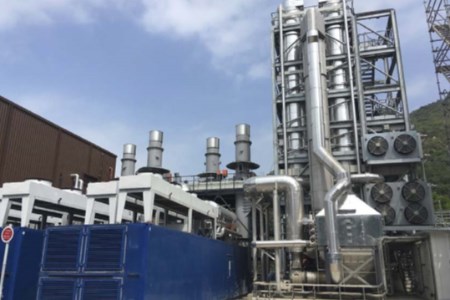 Within the solar system, there is an abundance of ammonia, spread throughout the planets. Astrogeologists estimate there are approximately 220 million km2 of sub-surface ammonia-water oceans on 14 solar system moons as well as the planet Pluto. One ocean on Titan is estimated to have a surface area of 80 million km2. These areas compare with the oceans on earth, which cover 361 million km2.

Sources of ammonia on Earth

On Earth there are no ammonia oceans, but copious quantities of ammonia are produced each year. It is estimated that the total non-manufactured production of ammonia is some 290 million tpy. Of this total, approximately 130 million t derive from humans and livestock. Non-industrial ammonia production is augmented by the Haber-Bosch process, which is the further source of nearly 200 million tpy.

One of the primary naturally occurring sources of ammonia originates from the decaying of organic matter. Ammonia forms during the degradation of amino acids within acidogenesis. It also forms part of the excreta cycle of humans and animals, as the kidneys secrete ammonia to neutralise excess acid. Consequently, it is a commonly encountered water pollutant.

To many wastewater engineers, ammonia in water represents a problem that costs money to fix. If a carbon source is required to treat the ammonia, as food for anoxic bacteria, annual costs can run into the millions.

Ammonia is also recognised as being toxic to fish. Lethal concentrations range from 2.5 to 25 mg/l. Further, as ammonia is biologically oxidised to nitrate it exerts an oxygen demand on the receiving water. This can reduce the oxygen in the water to a point where aquatic life forms cannot survive. Ammonia also acts as a fertilizer, causing the profuse growth of stringy bacteria and/or fungi and generally disrupting the natural environment.

This article was originally published in the December 2020 issue of World Fertilizer. To read the full article, and other great technical articles in this issue, view the full issue here. You can also register to receive a free regular copy of the magazine here.

Read the article online at: https://www.worldfertilizer.com/special-reports/31122020/the-emerald-option/