As a result of the COVID-19 pandemic and coincidental calamities, one may be tempted to resort to a crystal ball to predict what will happen to the global fertilizer market over the coming year. But market fundamentals remain surprisingly strong, and beneficial outcomes may be in the offing. 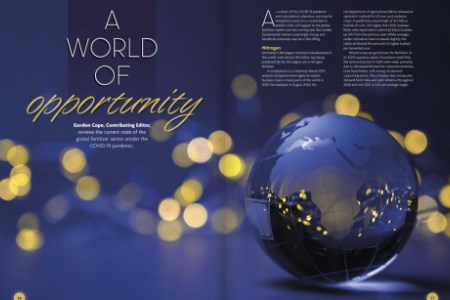 Ammonia is the largest chemical manufactured in the world, with almost 160 million tpy being produced. By far, the largest use is nitrogen fertilizer.

In comparison to a relatively dismal 2019, analysts and government agencies expect bumper crops in many parts of the world in 2020. For example, in August 2020, the US Department of Agriculture (USDA) released an optimistic outlook for US corn and soybeans crops. It predicted a record high of 15.3 billion bushels of corn, 12% higher than 2019. Soybean fields were expected to yield 4.42 billion bushels, up 25% from the previous year. While acreages under cultivation have increased slightly, the USDA attributed the amounts to higher bushels per harvested acre.

Record crops are good news for fertilizers. In its 2Q20 quarterly report, Eurochem noted that flat ammonia prices in 1Q20 were weak, primarily due to decreased demand for industrial ammonia. Urea fared better, with strong US demand supporting prices. The company sees strong urea demand from India and Latin America throughout 2H20 and into 2021, as US corn acreage surges.

The spate of Greenfield construction that marked much of the previous decade has largely dissipated, but several major nitrogen projects are still underway. Gulf Coast Ammonia (GCA) has begun construction of its state-of-the-art ammonia plant in Texas City, US. Completion of the 1.3 million tpy plant and adjacent deep-water port is expected by mid-2023. Production of nitrogen-based fertilizers and specialty chemicals will be targeted both domestically and internationally.

ANWIL’s expansion of its nitrogen capacity at its complex in Wloclawek, Poland, has reached the midway point. Three new modules – a 1200 tpy nitric acid unit, an ammonium nitrate solution unit, and a drum granulation unit – will increase total fertilizer capacity from 966 000 tpy to 1.46 million tpy when they come on-stream in 2022. In order to achieve optimum environmental performance, the company will use Thyssenkrupp’s EnviNOx technology to convert nitrogen oxide into nitrogen, oxygen and water, thus reducing emissions by around 4200 tpy (the equivalent of 1 million tpy of carbon dioxide).

This article was originally published in the December 2020 issue of World Fertilizer. To read the full article, and other great technical articles in this issue, view the full issue here. You can also register to receive a free regular copy of the magazine here.

Read the article online at: https://www.worldfertilizer.com/special-reports/29122020/a-world-of-opportunity/