The global ammonia capacity is poised to see considerable growth by 2030, potentially increasing from 253.34 million tpy in 2019 to 289.83 million tpy in 2030, registering a total growth of 23%. India is expected to drive and contribute 18% of the global capacity additions by 2030, says GlobalData. 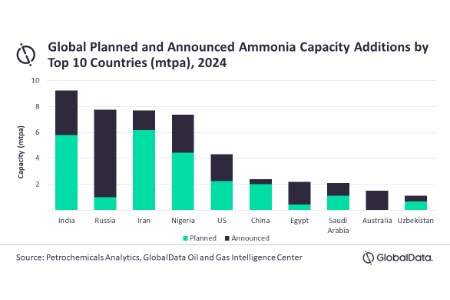 Dayanand Kharade, Oil and Gas Analyst at GlobalData, said: “India is set to have large ammonia capacity additions, to cater to the country’s increasing fertilizer demand and reduce dependence on imports. Russia and Iran’s abundant availability of low-cost feedstock and proximity to growth markets are the primary reasons for the rush in ammonia capacity additions in both the countries.”

Dangote Industries Ltd, Oteko and Nagarjuna Fertilizers and Chemicals Ltd will be the top three companies globally in terms of planned and announced capacity additions over the outlook period.

Read the article online at: https://www.worldfertilizer.com/special-reports/09112020/globaldata-india-russia-and-iran-to-drive-global-ammonia-capacity-additions-by-2030/

A renewable hydrogen plant will be built to provide feedstock into the Yara ammonia operations near Karratha in Western Australia following the final investment decision on the project.