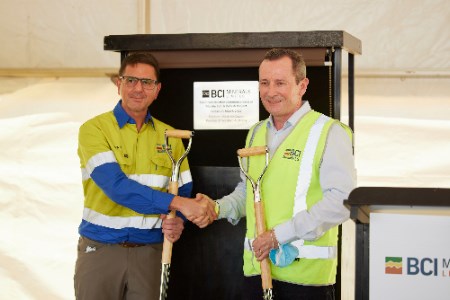 Mardie will produce over 5 million tpy of salt and is slated to be the first salt operation in Australia producing sulfate of potash (SOP) fertilizer as a by-product. The project will have an operational workforce of 200 and will comprise nine evaporation ponds, salt and SOP crystallisers plus salt washing and SOP process plants. Product will be shipped onto capsize vessels from a 2.4 km jetty with conveyor system.

BCI Minerals Managing Director Alwyn Vorster said after many years of project derisking, studies and approvals, construction commencement is an exciting milestone on the path of creating Australia’s largest solar salt project that will rank third in scale globally.

“Over the last year, BCI already invested more than $50 million in early works including expanding the village to 200 beds, creating trial ponds and commencing work on the seawater intake infrastructure.”

“Now we are building momentum with full steam construction and it is exciting to see key long lead items such as the seawater pumps arriving at site ready for installation,” Vorster said.

“Mardie is a fully integrated operation from seawater intake to ship loader and we will not have to rely on third party infrastructure.”

“Salt and SOP products will be primarily targeted into the Asian markets which have strong existing and growing demand, evidenced by the 16 memorandums of understanding we have signed so far with potential customers,” Vorster said.

“Unlike most resource projects, Mardie will not need ongoing exploration to extend project life. The key feedstock is inexhaustible seawater and we have access to an abundant supply of good quality seawater from the Indian Ocean. That, plus the fact that 99% of the required project energy comes from natural sun and wind for evaporation, make Mardie a 100-year sustainable opportunity,” Vorster said.

Read the article online at: https://www.worldfertilizer.com/project-news/30032022/mardie-project-reaches-construction-milestone/