Skip to main content
Advertisement
Advertisement
BCI Minerals has announced that all secondary approvals required for main construction have been secured for its 100% owned Mardie Salt & Potash Project on the Pilbara coast of Western Australia. 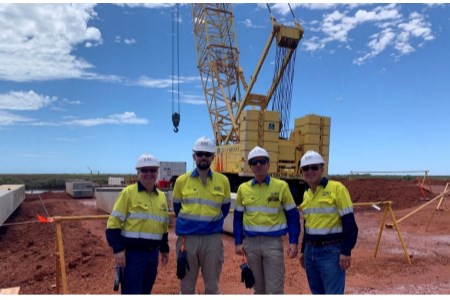 The secondary approvals include: a Mining Proposal approved by the Department of Mines, Industry, Regulation and Safety (DMIRS), the Part V Works Approval granted by the Department of Water and Environmental Regulation (DWER) and all necessary consents under Section 18 of the Aboriginal Heritage Act 1972 issued by the Minister for Aboriginal Affairs. Together, and in conjunction with the mining tenure recently secured, these approvals have allowed main construction of the definitive feasibility study footprint to commence.

Commenting on the news, BCI’s Managing Director, Alwyn Vorster said: “This is a historic milestone for BCI and the culmination of four years’ work by our dedicated team. Mardie will ultimately include a 100km2 evaporation pond and crystalliser system, two processing plants and a new export facility which will produce 5.35Mtpa of salt and 140ktpa of sulphate of potash fertiliser, driven sustainably by inexhaustible seawater and 99% natural sun and wind energy. We aim to complete construction of Pond 1 and fill it with seawater within six months which will represent the commencement of production and keep us on track to achieve first salt sales in late 2024.”

Activity ramp-up over the next six weeks is expected to result in full utilisation of the recently expanded 200- bed Mardie Village with McNally Group to double capacity over the next six months to create a 400-bed facility. It is anticipated that by late 2022 Mardie Village will experience periods of 100% occupancy as the McConnell Dowell port-related workforce join WBHO Infrastructure’s earthwork contractors and Ertech’s seawater pump installation and commissioning crews at site.

Initial main construction work will focus on completion of the seawater intake station and Pond 0, followed by Pond 1, Pond 2 and the Mardie village, with a roads package to commence in March. Pond 1 and the primary seawater intake station are scheduled for completion in 3Q22, and it is estimated to take three weeks to fill Pond 1. The completion and filling of Pond 2 will closely follow with gravity driving the inflow of seawater. By 4Q22 it is expected that approximately 40GL of seawater will have been pumped into Pond 1 and gravity fed into Pond 2 with the combined ponds covering an area of 24 km2.

Sequential filling of Ponds 3 to 9 will commence from 4Q22 with all ponds expected to be full by 4Q23 and the first salt harvest and sales anticipated in late 2024.

Read the article online at: https://www.worldfertilizer.com/project-news/21022022/construction-begins-at-mardie-potash-project/