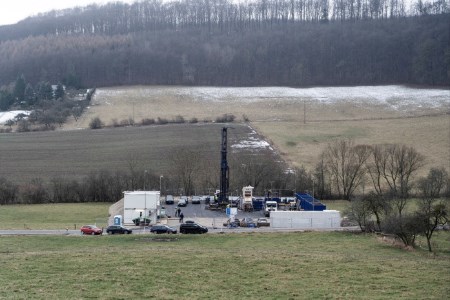 This hole is scheduled to be completed in early February and will be assayed for chemical composition immediately once core is withdrawn.

Activities at the second confirmatory drillhole, OHM-01, are set to commence next week with the construction of the drillpad. Due to a local shortage of building materials and the unpredictability of weather conditions, construction of the drillpad is now expected to extend until the second week of March. As a result, drillhole OHM-01 is now expected to be completed in late April.

Drilling and assay of these two confirmatory drillholes is targeted to allow South Harz to upgrade a substantial proportion of the current Ohmgebirge JORC (2012) Inferred Mineral Resource estimate to the Indicated category. Subject to concurrent and satisfactory advancement of all modifying factors, this is expected to allow the release of a comprehensive Scoping Study (a preliminary technical and economic assessment) for Ohmgebirge, which is now scheduled for completion during May 2022 (previously late March 2022).

South Harz Managing Director, Dr Chris Gilchrist, commented: “The commencement of drilling at Ohmgebirge is a significant milestone for the company. The first drillhole is scheduled to complete in February and we will then have the assays available to update the geological resource model a few weeks later.”

Image of the OHM-02 drill site within the Ohmgebirge Mining Licence courtesy of South Harz Potash.

Read the article online at: https://www.worldfertilizer.com/project-news/18012022/drilling-begins-at-ohmgebirge/

The green hydrogen will be used to produce fertilizers, melamine and technical nitrogen at Borealis operations in Linz, Austria. The electrolysis plant is scheduled to commence operations in 2025, with projected annual CO2 emissions reductions of up to 90 000 t.