Sirius Minerals marked another major milestone in the development of its £3.5bn polyhalite mine near Whitby today, as it named its new Vertical Shaft Sinking Machine, which will start hollowing out a 360 m deep shaft that will allow the construction of the 23 mile tunnel that will transport mined ore to Teesside. 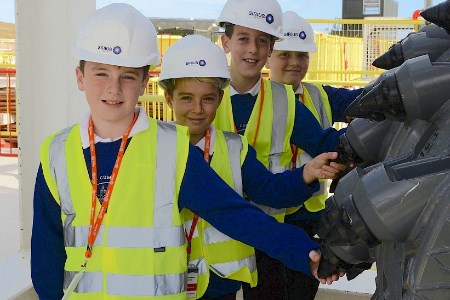 Children from nearby Sleights Primary School unveiled a plaque with the name of the machine, having won a competition between local schools. Isaac, Freddie, Joe, and Owen, from years 5 and 6, chose the name ‘Bessy’, as it means Oath or God and will protect the machine and people using it. The naming tradition dates back to the 1500s when miners prayed to Saint Barbara to protect them from the dangers underground.

“Using this innovative cutting edge machine is proof of our determination to use the best, most effective engineering solutions to build this mine,” said Chris Fraser, CEO and Managing Director. “It’s great that we could get the school kids involved too. Making a positive impact in the community is hugely important to us and we hope this project will inspire them to become the engineers and miners of the future.”

The 75 t machine will be used to excavate the first 120 m of a 360 m deep access shaft for the mineral transport system. Once the shaft is complete, a tunnel boring machine will be lowered into the shaft, assembled in a cavern at the bottom and sent north towards Teesside. Two other machines will dig south from Teesside and from Lockwood Beck, and all meet up to complete the tunnel.

Read the article online at: https://www.worldfertilizer.com/project-news/14092018/development-in-35bn-polyhalite-mine-at-whitby/

The board’s decision will see Mardie become the first new solar salt operation in Western Australia in almost 25 years, and the first to produce salt and sulfate of potash (SOP) from seawater.

Register for free »
Get started absolutely FREE in 2 minutes, no credit card required.