Skip to main content
Advertisement
Advertisement
Trigg Mining has said that its maiden air-core drilling programme has been completed at its Lake Throssell sulfate of potash (SOP) project, located east of Laverton in Western Australia. 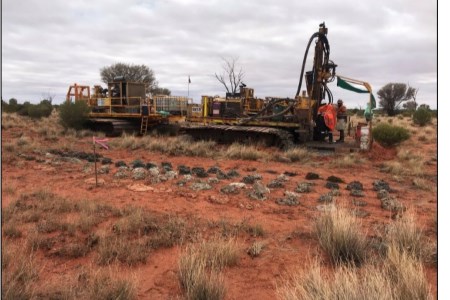 The programme, was significantly expanded from 38 holes to 54 holes, following the success of the of the first stage of the programme for a total of 5623 m. The programme has successfully covered the palaeovalley extent within the core tenement E38/3065 covering a strike length of approximately 36 km of the 112 km in the total project area.

The drilling programme was completed by Ausdrill with a track-mounted air-core rig with an average hole depth of approximately 104 m with a maximum depth of 144 m.

The programme commenced in the northern portion in December 2020 which returned high-grade brine results of up to 11 519mg/L (11.5kg/m3) SOP equivalent with an average grade of 9772mg/L (9.8kg/m3) SOP equivalent. The programme recommenced in late January 2021 and progressed systematically to the southern end and has confirmed the presence of a broad palaeovalley system approximately 100 m deep and up to 5000 m wide.

Throughout the system there was continued evidence of multiple aquifers at varying depths across the palaeovalley consistent with fluvial and fluvial glacial depositional environments. Thicknesses of unconsolidated sand and gravel of up to 35 m were encountered at multiple locations within the deepest sections of the palaeovalley and on the palaeovalley margins.

The data collected from this and earlier programmes will further refine the overall geometry of the palaeovalley as defined by the gravity model and increase the confidence in the geophysical interpretation between drill transects.

Preliminary field analysis of the salinity from the southern and central air-core drilling is comparable to the known results in northern end of the tenement with brine analysis results anticipated in a few weeks.

Following the completion of the air-core programme, geological modelling and resource estimation work has commenced for a maiden JORC 2012 Mineral Resource estimate which is expected to be completed next quarter.

Trigg Mining’s Managing Director, Keren Paterson, said: “The completion of our first-ever comprehensive air-core program at Lake Throssell is a significant milestone for the team and an important step towards unlocking the commercial potential of this large-scale, high-grade sulphate of potash deposit.

“We are encouraged and excited by what we have seen in the drilling so far, with preliminary observations from the field confirming that we have a very large-scale palaeovalley system extending over a strike length of 36km within granted tenement E38/3065, up to 5 km wide and up to 100m deep. Importantly, there is clear evidence of the presence of multiple aquifers across the profile – which suggests the potential for multiple production sources.

“We are now eagerly awaiting assay results from the drilling and work has already commenced on the geological model required to underpin a maiden JORC Mineral Resource estimate, which we expect to complete next quarter. This will provide a foundation for economic studies and is only the beginning of the resource story at Lake Throssell with roughly two thirds of the strike potential within the current Project area still untested.”

“We are continuing our systematic approach to unlocking the potential of this exciting high-grade sulphate of potash project, and we are looking forward to delivering a significant amount of news-flow for our shareholders and investors over the next few months.”

Read the article online at: https://www.worldfertilizer.com/project-news/09032021/trigg-mining-completes-successful-air-core-drilling-programme-at-lake-throssell/