Earlier this week, Canadian Pacific (CP) unveiled the next generation of grain transportation at the G3 Pasqua elevator near Moose Jaw (Saskatchewan). The 8500 ft high efficiency product (HEP) train features new, and highly efficient, Canadian-made hopper cars, and can move approximately 44% more grain than the prior generation of grain train. 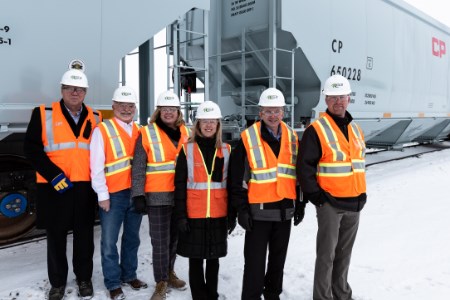 "A state-of-the-art loop track terminal like this is the perfect backdrop for launching our first HEP train and bringing in a new, more efficient era of moving Canada's grain to market," said Joan Hardy, CP's Vice-President Sales and Marketing – Grain and Fertilizers.

"As CP continues to take delivery of new railcars, and elevator operators expand their facilities to handle 8500 ft trains, this HEP train will become the new gold standard – driving further efficiencies for farmers, shippers and the entire grain supply chain."

Sharing the podium with CP at the landmark event were Mark Dyck, G3's Senior Director Logistics, and the Honourable Lori Carr, Saskatchewan Minister for Highways and Infrastructure.

G3 constructed its state-of-the-art Pasqua terminal loop track to handle the 8500 ft long HEP trains. The fast loading loop track means CP can keep locomotives attached to the train during loading, and those same locomotives are in place to launch the train once loading is complete.

"CP's new high-capacity hopper cars add an important link in the grain supply chain," said G3 CEO Don Chapman. "Combined with fast, efficient loading on G3 loop track systems, these trains will accelerate the flow of grain to market, to the benefit of all our customers. G3 is proud to work in close collaboration with CP."

The new hopper cars that make up today's train feature a capacity 10% greater by weight than the older-model Government of Canada cars, and 15% more volume. The cars carry this extra product on a frame 5% shorter than the older cars, meaning more cars can fit into a train of the same length. The cars are part of a half-billion-dollar investment CP is making to upgrade its fleet to better and more efficiently serve farmers and the Canadian economy. By the end of this year, CP will have approximately 500 new hopper cars in service, and that number will grow to 1000 by spring 2019. Over the next four years, CP plans to purchase a total of 5900 new hopper cars.

"We are pleased to see CP unveil their high-capacity hopper cars," Lori Carr, Saskatchewan's Minister of Highways and Infrastructure said. "CP's investment along with G3's investment in a long loop track will help our producers get their product to market more efficiently and in greater volume."

"The future of the grain supply chain is bright," said Hardy.

"With continued collaboration, a commitment to innovation, and strategic capital investment in key markets, like Saskatchewan, the grain supply chain is well positioned for continued success."

Read the article online at: https://www.worldfertilizer.com/product-news/07122018/canadian-pacific-unveils-high-efficiency-product-train/

Sequoia and the Commonwealth Bank of Australia will invest US$39 million and US$25 million respectively into the facility, complimenting existing investments led and arranged by Taurus Mining Finance Fund No. 2 L.P (Taurus) and the Australian Government’s Clean Energy Finance Corp. (CEFC).