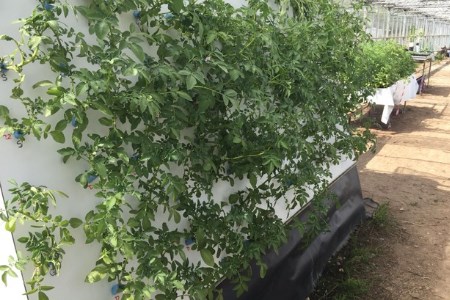 Hawk Energy, a knowledge-based business solutions provider based in Dubai with a research and development branch in London, has partnered with British start-up Airponix, which will harvest its first large crop of potatoes grown without soil, in a promising sign for a technology that claims it can deliver high vegetable yields with minimal costs and environmental degradation.
Advertisement

At its new 1000 m2 greenhouse in Norfolk, Airponix has ditched soil to grow potatoes using a nutrient-rich ‘fog’ sprayed out of modified inkjet printers down long polythene tunnels of crops.

Airponix, which won the Business Green Technology Awards and the Rushlight Award for its bio technology, states its growing technique can produce yields 50 times higher per hectare per year compared to commercial UK potato growers, while requiring no arable land and 85% less water than conventional agriculture.

“The use of 85% less water to grow crops was one of the main factors that made us determined to introduce this pioneering technology to the Middle East Region where water for irrigation is scarce and very costly,” said Mohamad Al Shihabi, Founder of Hawk Energy. He added: “We are certain that this technology will prove vital for the fast-growing agriculture industry of the United Arab Emirates where we plan to first introduce it, before we move to other countries in the region.”

“Trials of our breakthrough technology means that we can produce crops, such as potatoes, with lower production costs and higher quality, competing strongly against conventionally grown new baby potatoes,” said co-founder Michael Ruggier in a statement.

“The potential cost of the system is very low and requires little energy to operate,” he added. “Manual labour is also greatly reduced because harvesting is a simple clean process and root crops don't need washing. This means that everyone can benefit from our technology and it has the potential to guarantee high-yield high quality food production independent of external environmental conditions.”

Trials and research by Airponix have shown that the technology is suitable for food production even in arid or degraded regions, and without the need for herbicides, fungicides or pesticides.

The company says its system is an improvement on rival aeroponic growing methods thanks to it line spray technology, which produces tiny water droplets better suited to staple food crops such as rice, wheat or potatoes.

The Airponix system uses nutrient-laden fog to create a cloud of <20 micron droplets using very little energy. The fog moves freely around the protective polythene enclosures in which the growing plants are supported. Using electrostatic charge, the droplets adhere to the plants’ leaves and roots and absorbed. A smart fully automated system is being developed to give plants what they need, when they need it, operated by a mobile phone app.

Read the article online at: https://www.worldfertilizer.com/product-news/06062018/hawk-energy-brings-bio-technology-to-middle-east/