Skip to main content
Advertisement
Advertisement
Sinochem Group and Belarusian Potash Co. have signed a five-year memorandum on the supply of new type of potash fertilizers (halurgic granular white Muriate of Potash with the addition of zinc and sulfur). 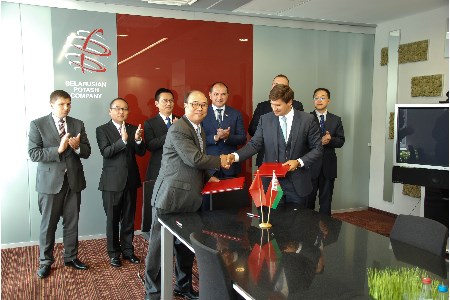 According to the memorandum this product will be supplied to the Chinese market during a five-year period from 2019 to 2023 with the right to sign annual contracts based on the current market situation. According to the terms of the document the total supply volume for the five years will be 700 000 t.

The signed document follows and develops the cooperation between the companies, contained in the existing memorandum on other types of Belarusian potash, signed on 10 May 2015.

The Deputy Director General on Sales and Marketing of JSC Belarusian Potash Co., A. Polyakov, commented: “The relations of Sinochem Group and BPC is a real strategic partnership, based on long-term experience of successful collaborative work. It is noteworthy, that the signing of the new memorandum comes on an anniversary year. This year our potash giant, JSC ‘Belaruskali’, will celebrate its sixtieth anniversary, and BPC in its turn will celebrate its first small anniversary – the fifth. At all times during its existence BPC cooperated with Sinochem Group in the atmosphere of friendship, mutual respect and understanding. We highly value the established business relations with our Chinese partners and believe that they will get stronger in the course of time.”

The Director General of JSC Belaruskali, I. Golovaty, commented: “The signing of the new memorandum is a further acknowledgement of the fact that our product is highly-demanded on the Chinese market. We are sure, that our new product with the addition of zinc and sulfur will quickly become popular and not only in the Asia region. Moreover, the new memorandum stimulates trade and economic exchange between China and Belarus, as well as will surely enhance strategic cooperation of Belaruskali and BPC with Sinochem Group – one of the largest potash importers in the world.”

Read the article online at: https://www.worldfertilizer.com/potash/13082018/sinochem-and-belarusian-potash-co-sign-five-year-memorandum/

The company has announced a new joint venture developing green ammonia and fertilizer projects with the focus on Central America and the Caribbean.