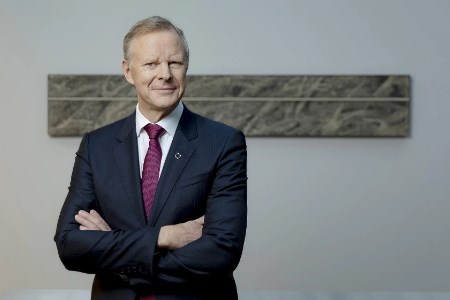 Roeland Baan has since 2016 been President and CEO of the global stainless steel company Outokumpu, listed on the Finnish stock exchange. Throughout his career, Mr. Baan has held a wide range of global CEO and Executive Vice President (EVP) positions at Aleris International, Arcelor Mittal, SHV NV and Shell.

Baan is Vice Chairman of the International Stainless Steel Forum and member of the Executive Committee of Eurofer. He also serves as a supervisory board member of SBM Offshore NV and as an independent board member of Norsk Hydro ASA. Mr. Baan is a citizen of The Netherlands and holds a MSc in Economics from Vrije Universiteit Amsterdam.

“I am delighted to announce Roeland Baan as new CEO of Haldor Topsoe A/S. He has remarkable global experience and a proven track record of driving growth, developing businesses and building cohesive organisations. I am convinced he will contribute to the continued strong performance of Haldor Topsoe. Topsoe is a profitable company with a solid core business. With Roeland’s direction, we will continue to focus on being global leader in the markets in which we operate,” said Jeppe Christiansen, Chairman of the Board of Directors of Haldor Topsoe A/S.

On his appointment, Baan said: “I am excited to relocate to Denmark and join Haldor Topsoe. I am fascinated by the industry and impressed with Topsoe’s cutting-edge energy efficiency solutions for the chemical and refining industries. I look forward to working with the board and the leadership team as well as getting to know Topsoe’s customers and committed employees.”

Bjerne S. Clausen will continue as CEO until Roeland Baan takes up his new position on 1 June 2020.

“I would like to take this opportunity to thank Bjerne S. Clausen for his contribution and dedicated work during his more than 40 years with the company. Bjerne is retiring after an impressive career. As a scientist and leader, he has been a defining figure in both Topsoe’s technological and commercial development. As CEO, Bjerne has played an instrumental role in making Haldor Topsoe the focused and profitable company it is today,” said Christiansen.

Clausen commented: “I have had an amazing journey here at Topsoe, worked on a vast variety of exciting projects, worked with some of the sharpest brains in the field of catalysis and chemistry, and met customers and partners around the globe. I cannot imagine a more rewarding career. I welcome Roeland Baan to the company. He has come to a great company with dedicated and passionate colleagues.”

Read the article online at: https://www.worldfertilizer.com/nitrogen/10022020/haldor-topsoe-appoints-ceo/

The company has announced the appointment of Zain Ajlouni as a Regional Director of Sales, Marketing and Customer Services for the Middle East and Northern Africa (MENA).