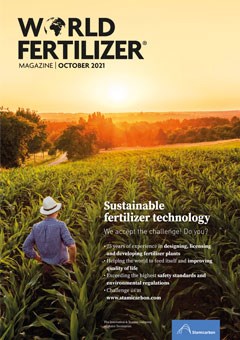 Blink and you’ll miss it, such is the pace at which new green ammonia projects are being announced (though I could equally be talking about energy suppliers here in the UK going out of business on the back of record natural gas prices).

As I write, in the past week details of a project backed by Egypt’s sovereign wealth fund and Fertiglobe, an OCI-ADNOC joint venture, were announced, while Incitec Pivot Ltd. and Fortescue Future Industries have started a feasibility study into green ammonia production in Queensland, Australia. These are heady times for the fertilizer manufacturing industry; in the potash sector, a clutch of companies in Australia (Kalium Lakes, Australian Potash, Salt Lake Potash, Agrimin, BCI Minerals and Reward Minerals), Eritrea (Danakali) and Morocco (Emmerson) are seeking to ride the wave of record prices as they begin commercial production in the next decade. Kalium Lakes recently produced its first batch of sulfate of potash (SOP), although the race to be the first commercial SOP producer in Australia is still ongoing.

As is so often the case however, there are two sides to the story. The International Energy Agency (IEA) recently published an ‘Ammonia Technology Roadmap’ that outlined three different scenarios for ammonia production and emissions between now and 2050. Some key conclusions were that “Nearly 60% of the cumulative emission reductions in the Sustainable Development Scenario [by 2050, direct CO2 emissions from ammonia production have fallen by over 70%] stem from technologies that are currently in the demonstration phase” and that, amongst other infrastructure deployments required, an average of ten 30 MW electrolysers need to be installed per month to achieve the Sustainable Development Scenario. While (rightly) lauding the efforts of governments and industry so far, the report’s authors say that greater ambition is required.1

While a report can be discussed and then quietly filed away, commodity prices can’t. The high gas prices that have felled UK energy suppliers left, right and centre have also forced the likes of Yara, Borealis and CF Industries to curtail ammonia production at facilities across Europe, sending shivers down the supply chain. CF Industries’ Billingham Complex in the UK will continue operating until at least the end of January 2022, following agreements made with firms that purchase the CO2 that is a by-product of its ammonia production. However, CF Industries has said that it expects the UK government and industrial CO2 consumers to work together over the next 3 months to develop a longer-term strategy for the supply of CO2. With UK industry and government alike grappling with the repercussions of Brexit, COVID-19, the global supply chain crisis and the expectation that high gas prices will persist through the rest of 2021, meeting CF Industries’ expectations seems a tall order – further output cuts could become a thing of 2022.

So, to borrow a phrase that has been in plentiful supply of late, let’s cross fingers and hope this isn’t a winter of discontent for the European fertilizer industry.