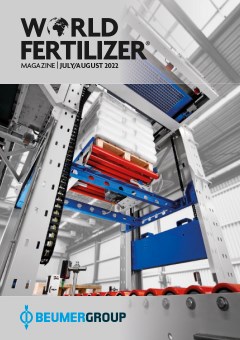 The last 12 months have been transformational for decarbonising ammonia. On one hand, we’re no longer having a debate about technical feasibility, we’re witnessing a race between first movers to scale-up. On the other hand, the idea of ammonia as an energy commodity is no longer a quirky concept, it is a core component of the carbon-free toolkit for any economy or sector that expects to use sustainable molecules in the future.

Late last year, the International Energy Agency (IEA) published its Ammonia Technology Roadmap, in collaboration with the International Fertilizer Association (IFA).1 The Roadmap provides a deep dive into the technologies available for decarbonising ammonia production. When both the IEA and IFA say we can make sustainable ammonia, it is probably time to do so.
A few months ago, we saw the publication of ‘Innovation Outlook: Renewable Ammonia,’ by the International Renewable Energy Agency (IRENA).2 This was written in collaboration with the organisation I lead, the Ammonia Energy Association (AEA), which promotes the responsible use of ammonia in a sustainable economy.
IRENA’s Renewable Ammonia report dives into the market drivers for decarbonising ammonia production, and the scale and necessity of doing so if we hope to limit global temperature rise to anything close to 1.5°C.
Fertilizers are a big market and it is imperative that we decarbonise them. But new markets are opening for ammonia – markets that are bigger than fertilizer – and these markets require a decarbonised molecule. Ammonia as a fuel for the maritime sector, ammonia as a fuel for the power sector, ammonia as a hydrogen carrier. There are other opportunities also, but these three markets represent pillars of growth for ammonia.
To be consistent with a 1.5° scenario, IRENA sees these new markets pushing ammonia demand from 180 million t today to 688 million t in 2050. Just three decades from now, the shipping sector could be using more ammonia than the fertilizer sector uses today.
While the focus for IRENA is on renewables, the mission is decarbonisation. This is where ammonia moves beyond colours and the certification of carbon intensity becomes critical.
Some markets will care deeply about whether ammonia comes from fossil or renewable sources. Others markets won’t. But all markets will care about the carbon intensity of ammonia. This is why the Ammonia Energy Association is developing an ammonia certification scheme, so that a globally harmonised methodology for assessing the GHG emissions from ammonia production becomes available.3
Next up – in the Autumn – we expect to see another significant report, one that builds on both the IEA and IRENA publications. The Mission Possible Partnership, in partnership with the World Economic Forum, Energy Transitions Commission, and Rocky Mountain Institute, is preparing to publish its ‘Ammonia Sector Transition Strategy,’ which will be a roadmap for bringing the emissions of the ammonia sector to zero in 2050. This will be the latest in a series of sectoral studies, building upon similar work for decarbonising steel production4 and aviation5 among others.
While these paper studies push ideas forward, it is the implementation of these ideas that matters. And that’s the change we see now, on the ground, in Spain, Saudi Arabia, Australia, Chile, India, Norway, Canada, United States, Germany, Oman, Morocco, and elsewhere. At the Ammonia Energy Association, we are now tracking more than 180 low-carbon ammonia production projects under development or already in operation, and this number continues to grow.