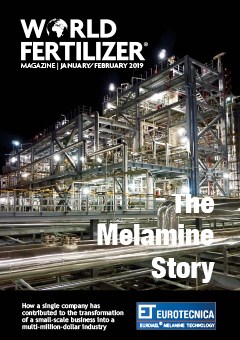 What’s in store for the nitrogen market in 2019?

In a year of widespread disruption and uncertainty, nitrogen prices outperformed expectations in 2018. Supply management policies in China and the re-imposition of US sanctions on Iran offset the adverse impact of new urea capacity additions, culminating in a US$31/t average increase in urea prices compared to 2017. In the ammonia market, prices were also stronger for much of the year on the back of delayed commissioning at export plants and strong demand from China. Going into 2019, however, ammonia and urea prices had lost their momentum as supply improved and some major import buyers failed to materialise in line with expectations.

Urea prices have begun to soften amid the prospect of seasonal exports from China, which has more than offset the absence of Iranian urea in the last two Indian import tenders by MMTC. Price decreases are expected to continue until 2Q19, before stabilising for the remainder of the year. The urea market is expected to come into balance in 2019 as capacity closures in China help offset additions in the near-term. Prices and utilisation rates are also forecast to increase while the market undergoes a period of interim tightness between 2019 – 2022. This is supported by stronger trade growth in key importing markets such as Brazil, and lower exports from China (due to an escalating price floor) and Iran (due to geopolitical barriers).

The Tampa ammonia contract price between Yara and Mosaic was settled at US$285/t CFR for January 2019, a US$40/t drop on the December 2018 price. This follows a US$30/t decrease between November and December, which was triggered by an abysmal fall application season in the US. With new merchant supply on the horizon, coupled with uncertainty over US spring ammonia application, ammonia prices are set for a rocky 2019.

Over the next 12 months, CRU expects the commissioning of six nitrogen projects outside of China. There are only two ammonia plants forecast to commission this year that will have a measurable impact on the merchant ammonia market. EuroChem’s major merchant ammonia expansion (891 kt/y) in Kingisepp is the only major near-term ammonia expansion, forecast to commission in April 2019. Outside of this, there is little other net ammonia capacity set to start-up in 2019.

The urea market is set for a relatively quiet year of plant start-ups following recent commissioning announcements in Azerbaijan, Turkmenistan, and India, with only two further projects set to start-up in 2019 outside of China. The 1320 kt/y Lordegan greenfield urea complex in Iran had been expected to commission this year but is at risk following the imposition of US sanctions on the country. The sanctions could have a smaller impact on the progress of the Lordegan project compared to other expansions in Iran, as most of the equipment required for construction and commissioning was already on site prior to the introduction of US sanctions.

Nitrogen fertilizer demand was hit in 2018 by lower consumption in China and emerging markets such as Argentina, Turkey, and Western Europe. However, CRU expect demand to rebound in 2019, as crop fundamentals outweigh an impending global economic slowdown.

Many emerging markets remain caught in the crossfire of economic and geopolitical tensions, suffering rapidly depreciating currencies against the US$ since 2Q18, increasing the costs of imported fertilizer. This is expected to continue to negatively impact urea demand in mid-tier markets such as Argentina and Turkey in 2019. However, large export-orientated agricultural markets, such as Russia and Brazil, are anticipated to benefit, since a weaker exchange rate has boosted crop margins, allowing farmers to invest more in fertilizer application.