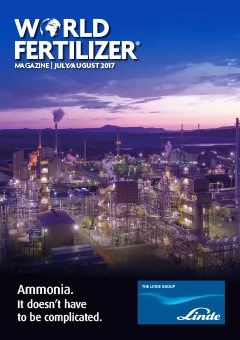 The outlook for the nitrogen market: it’s all about China

The urea market remains in a state of slow demand and weakening price ideas as the market enters the quietest period of the year. Indian buying has mostly come to an end; and elsewhere, spot buyers have been holding out in anticipation of even lower prices.

A further downside risk for the nitrogen market is the outlook for Chinese export volume in 2H17 now that the peak domestic season is drawing to a close. Domestic operating rates appear to be improving, with utilisation reported close to 60% (at the time of writing). There is uncertainty as to whether plants will reduce operating rates in 3Q once domestic demand is over or if increased pressure will be put on the international market by such levels of excess supply. There are mixed views over the extent to which the country’s highest-cost urea plants will adhere to production economics, with some speculating that provincial administrations may choose to give favour to local labour markets by running loss-making plants to sustain employment.

Furthermore, the Chinese Nitrogen Fertilizer Association (CNFA) has become a persistent and vocal advocate against Chinese producers reducing price ideas below cash costs, and while the association has no legal power to enforce its views, producers have been reasonably disciplined and followed its price guidance in recent years. If nothing else, a physical lack of international demand will limit volumes able to move to ports if warehouse capacity cannot be cleared, and this will cap the volume of unprofitable exports from China in the coming quarter.

The Chinese Ministry of Industry and Information Technology (MIIT) has announced a research programme aimed at optimising the country’s fertilizer capacity. As part of the programme, fertilizer capacity that is considered to be outdated would be forced to close but new and advanced capacity will be encouraged to expand. The government will subsidise the construction and development of more advanced capacity, if the owners are willing to switch off obsolete capacity.

The CNFA has reported that about 13 million tpy of urea capacity is likely to close between 2015 – 2020. Under the MIIT research programme, despite these closures, it is envisaged that overall nominal fertilizer total capacity volume will not change significantly if replacement and expansion of other capacity is encouraged and subsidised.

In general, fertilizer capacity that is considered to be outdated is mainly located in central cities or close to residential areas. These plants are required to be relocated because of uneconomic and emission issues. Under the research programme, these operations could see upgrades to technology and expansion of scale, moreover, the government could subsidise the relocation.

Some fertilizer producers are closing obsolete operations in favour of modern larger capacity projects. For example, Henan Jinkai Yanhua closed 200 000 tpy of inefficient urea capacity, but a 600 000 tpy of new urea capacity will be finished in 2017.

We are often asked, why do some industries in China have significant structural overcapacity? The main reason is excessive government intervention. For example, steel, cement and coal were strongly supported and subsidised in the past, as the government stimulated the economy through fiscal stimulus, leading to serious oversupply. Now, the government has been forced to shut down older, less efficient capacity in these industries. The position of the fertilizer industry situation is similar to that of coal and steel. However, considering that the primary objective for the fertilizer sector is to stabilise domestic fertilizer prices and protect small farmers’ interests, it seems unlikely that China would pursue policies that would lead to a substantial reduction in fertilizer capacity, which might negatively influence fertilizer price stability or availability.